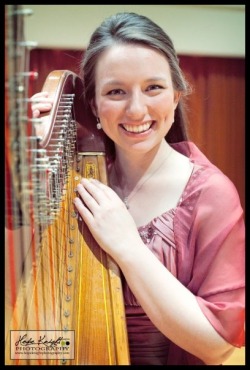 Anna Joy Knight entered the world of music at a young age, studying violin and piano, singing in choirs and with her family, and adding harp studies in high school. Miss Knight has performed across the U.S. and in Canada as an instrumentalist and as a singer, with a focus on harp and voice performance since 2004.

Miss Knight holds a diploma in harp performing from the Associated Boards of the Royal Schools of Music (United Kingdom), and she graduated from Southwestern Baptist Theological Seminary with a Bachelor of Arts in Music, harp performance. After freelancing in Dallas-Fort Worth for several years, she is pursuing graduate performance studies at Shenandoah University in Winchester, Virginia. Her harp instructors have included Ms. Bridgett Stuckey of Shenandoah University in Winchester, Virginia, Dr. Jaymee Haefner, head of the harp department at the University of North Texas in Denton, Texas, Lawrence Odom, former principal harp for the Kennedy Center Opera Orchestra and White House harpist of Fort Smith, Arkansas, and Carol McClure of Nashville, Tennessee. Miss Knight continues to find great joy in singing solo and ensemble works, and enjoyed the vocal coaching of Lynda Poston-Smith while living in Fort Worth, Texas.

Miss Knight maintains a performing schedule as a harpist and vocalist and has a private teaching studio in Winchester. In addition to her orchestral and solo classical work, Miss Knight also arranges and performs hymns and songs for voice and harp.

*Diploma in Harp Performing (DipABRSM), the Associated Boards of the Royal Schools of Music (United Kingdom), 2004.
*Bachelor of Arts in Music, harp performance, from The College at Southwestern Baptist Theological Seminary, Fort Worth, Texas, 2009

Past orchestral and ensemble engagements include

Past solo venues include

Past and current ensemble experience includes

Past solo performances include

*Saviour: a Modern Oratorio (Greg Nelson and Bob Farrell) with Scot Cameron and “One Voice” in Paris, Texas and Dallas, Texas
*The role of Mary in the U.S. premier of The Christmas Lamb (Ron and Patricia Owens), the Walton Arts Center, Fayetteville, Arkansas
*Public solo recital on the campus of Southwestern Baptist Theological Seminary, Fort Worth, Texas